As in “Emergence of Shared Intentions is Coupled to the Advance of Cumulative Culture” (Angus & Newton, 2015) we enumerate an algorithm which, given g, k, and a binary |N|-length vector, type where the ith entry of type implies whether agent i is SI type (‘1’) or N type (‘0’), will return all possible coalitions of size 2..k in a useful data structure. 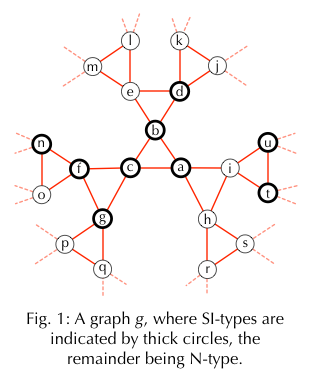 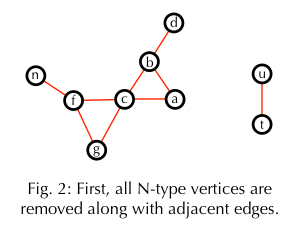 Since N type agents cannot form coalitions larger than singletons, nor can they facilitate coalitions among SI types, they (together with their adjacent edges) can be removed from the graph (Fig. 2).

Next, the smallest non-singleton coalitions of size k=2 can be formed immediately by collecting any adjacent vertex-pair (Fig. 3). 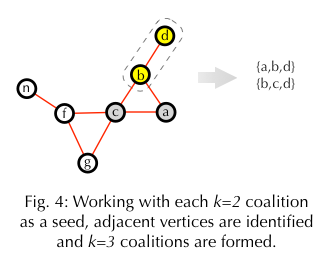 For coalitions of size k>2, an iterative process is conducted whereby all coalitions of size k-1 are used as seeds, with single vertices adjacent to a member of an existing seed coalition used to form a larger coalition. In the case of Fig. 4, the {b,d} k=2 coalition seed is considered, leading to the formation of two new k=3 coalitions, {a,b,d} and {a,c,d}.

Note, coalitions of size k>2 can be reached by the algorithm by the growth from distinct seeds, however, only a single replicate of such a coalition would be stored in the library.

The above algorithm is implemented in Matlab®  in the routine “GetAllCoalitions_k.m” which can be downloaded as part of the accompanying codes to Angus & Newton (2015).